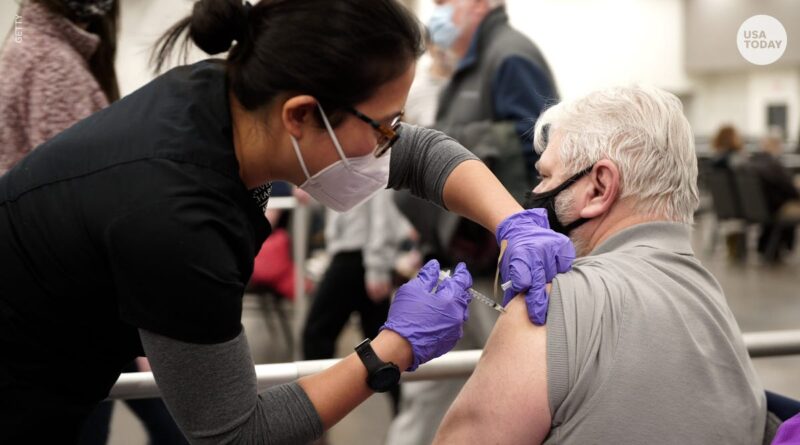 The nation is going in the “wrong direction” and new coronavirus cases will continue to climb unless more Americans get vaccinated, Dr. Anthony Fauci said Sunday.

“Fifty-percent of the county is not fully vaccinated,” President Biden’s top medical adviser said on CNN’s State of the Union. “That’s a problem.”

The outbreak has been fueled by the extremely contagious delta variant, aided by a nationwide relaxation in mask and social distancing guidelines. And by the refusal by many Americans to get vaccinated, despite cajoling, mandates and giveaways.

Even conservative GOP leaders such as Florida Gov. DeSantis and Alabama Gov. Kay Ivey have lobbied the holdouts. Ivey said last week that people need to have “common sense” and get vaccinated, saying it’s “time to start blaming the unvaccinated folks, not the vaccinated folks.”

Fauci said the nation has the tools to alter dark predictions of surging U.S. deaths, repeating the oft-heard Biden administration mantra that the latest surge in cases is “really an outbreak among the unvaccinated.”

“We have two kinds of America,” Fauci said. “The very vulnerable, unvaccinated part and the really relatively protected vaccinated part.”

Also in the news:

►Missouri Attorney General Eric Schmitt, who is running for the GOP nomination for U.S. Senate, said he plans to file a lawsuit Monday to block St. Louis city and county from enforcing a new mask mandate.

►After days of criticism, elected officials in a Michigan’s Shiawassee County said they will return the $65,000 bonuses they gave themselves with federal COVID-19 relief aid.

►The University of Wisconsin System will offer almost $500,000 in scholarships this fall to students on campuses that get at least 70% of their students vaccinated by Oct. 15. Drawings will be held for $7,000 scholarships.

►Phil Valentine, a conservative Tennessee-based radio host, has changed his mind about his previous vaccine-hesitant messaging after being hospitalized in critical care because of COVID-19, his family said.

📈Today’s numbers: The U.S. has had more than 34.4 million confirmed COVID-19 cases and 610,800 deaths, according to Johns Hopkins University data. The global totals: More than 193.9 million cases and 4.1 million deaths. More than 162.7 million Americans – 49% of the population – have been fully vaccinated, according to the CDC.

📘What we’re reading: Florida leads the nation in new cases, recording more this week than California, Texas, New York and Illinois combined. And like elsewhere, the unvaccinated make up nearly all of the hospitalized and the dead. But residents, including many health care workers, are still wary of the shot. Read more.

Keep refreshing this page for the latest news. Want more? Sign up for USA TODAY’s Coronavirus Watch newsletter to receive updates directly to your inbox and join our Facebook group.

A protest against vaccine mandates drew about 100 people to the Iowa State Capitol, including a state lawmaker who described the mandates as a “crime against humanity.” The rally Saturday came two weeks after Trinity Health announced all employees at its seven Iowa hospitals were required to get vaccinated or risk termination. Republican state Rep. Jeff Shipley, who spoke at the rally, was among more than a dozen lawmakers who signed an open letter to Trinity stating “confusion and distress” over the company’s decision to require vaccinations for its employees.

“You can take off a mask but you can’t undo a vaccine,” Brei Johnson of Informed Choice Iowa told the Des Moines Register, part of the USA TODAY Network. “That’s a slippery slope to what comes next.”

The International Olympic Committee eased its mask and social distance restrictions for Olympic medalists Sunday, announcing that athletes on the podium can briefly remove their masks to smile for the cameras and each other. The decision follows “scientific advice,” an IOC statement said. Health protocols agreed to ahead of the Tokyo Olympics to control COVID-19 infections had required all medalists to keep masks on for the whole ceremony. The new maskless moments require athletes to stay on their own podium steps. Masks must be back on for group photos on the top step.

“It has been decided today … to allow athletes to have a physically distanced image on the podium without their masks on for 30 seconds, and a group photo with masks on the gold-medal step,” the IOC said in a statement.

As pandemic surges, CDC hasn’t toughened guidelines. So others are.

In May it seemed the pandemic was being beaten back. But in the last two weeks COVID-19 cases have increased 171%. The death rate is up 19% over the week before. Breakthrough infections are making the news, hitting sports teams and politicians. Yet the message from the federal government hasn’t changed. Get vaccinated. If you’re not vaccinated, wear a mask.

Increasingly, that feels like it’s not enough. With guidance from the CDC remaining unchanged, local governments and individuals are taking their own steps to protect themselves and others.

People in Arkansas are already testing positive at a pace faster than the worst state in the summer 2020 outbreaks, a USA TODAY analysis of Johns Hopkins University data shows. In the week ending Saturday, Arkansas reported 11,748 cases, giving it a rate of about 389 cases per 100,000 population per week. The fastest-reporting state in the summer 2020 surge was Florida, which reported a rate of about 387 cases per 100,000 per week at its worst.

A number of states, including Florida, could soon surge past the summer 2020 mark. Louisiana’s reporting a rate of 363, while Florida is reporting 341. Those counts have all been climbing precipitously.

Several states, including Florida, Nebraska, Iowa and South Dakota, scaled back their reporting of COVID-19 statistics this month just as cases across the country started to skyrocket, depriving the public of real-time information on outbreaks, cases, hospitalizations and deaths in their communities. The trend of reducing data reporting has alarmed infectious disease specialists who believe that more information is better during a pandemic. People have come to rely on state virus dashboards to help make decisions about whether to attend large gatherings or wear masks in public, and understanding the level of risk in the community affects how people respond to virus restrictions and calls to get vaccinated.

Epidemiologist Janet Hamilton said part of the problem is that public health officials generally don’t have sophisticated data systems, so it is more labor intensive to produce daily dashboards.

Police in Sydney, Australia, made arrests on Saturday as thousands took to the streets to protest COVID lockdowns, and some knocked down barriers and threw plastic bottles and plants. The protesters in Sydney and other cities, who were largely unmasked, carried signs that read “freedom” and “the truth.” The demonstrations came as cases of the coronavirus are on the rise.

“We live in a democracy and normally I am certainly one who supports people’s rights to protest … but at the present time we’ve got cases going through the roof and we have people thinking that’s OK to get out there and possibly be close to each other at a demonstration,” state Health Minister Brad Hazzard said.