SAN FRANCISCO — San Francisco Bay Area health officials recommended Friday that everyone again wear masks inside public buildings, offices or businesses regardless of whether they are vaccinated.

The counties of San Francisco, Santa Clara, San Mateo, Marin, Alameda, Contra Costa, Sonoma and the city of Berkeley stopped short of requiring masks indoors but said wearing them will ensure all unvaccinated people are masked in those settings.

The region stopped requiring vaccinated people from wearing a mask indoors last month when California fully reopened its economy on June 15 and did away with capacity limits for indoor businesses and restaurants and social distancing.

The Bay Area has seen some of the highest vaccination rates in the state. Several of the area’s seven counties have at least 80% of their residents 12 and older vaccinated with at least one dose.

The announcements Friday came amid a spike in COVID-19 cases, most of them the highly transmissible delta variant that has proliferated since California fully reopened its economy on June 15. The vast majority of new cases are among unvaccinated people.

MORE ON THE PANDEMIC:

— CDC leader: US in ‘pandemic of the unvaccinated’

HERE’S WHAT ELSE IS HAPPENING:

NEW YORK — Pfizer announced U.S. regulators have agreed to a “priority review” of whether its COVID-19 vaccine should be fully approved, with a decision set for no later than January.

More than 186 million doses of the vaccine made by Pfizer and its German partner BioNTech have been administered in the U.S. alone since December. Many more doses have gone to other countries that have authorized emergency use of the vaccine during the pandemic.

Vaccines cleared for emergency use still must undergo the stringent full approval process, a step that might help persuade some people who aren’t yet immunized to roll up their sleeves.

The Food and Drug Administration’s January deadline is a formality. The decision could come far sooner given how closely the agency has been monitoring the vaccine’s widespread use.

Pfizer’s application, submitted in late May, includes the latest data from a large study that tracked participants 16 and older for six months after their second dose. The vaccine is given to people as young as 12, and Pfizer also intends to submit data needed for full approval in that age group.

WASHINGTON — The White House says it’s in no hurry to lift COVID-19 international travel restrictions, a day after President Joe Biden said he hoped to have an updated timeline for easing them.

Speaking during a White House briefing, COVID-19 coordinator Jeff Zients said: “We must remain vigilant, particularly about the spread of variants and we’ll reopen when the medical folks and health experts believe it’s safe to do so.”

Zients adds any decision about opening international travel will be guided by a review of coronavirus cases, vaccination rates and virus variants.

European allies have chaffed at the restrictions, given in some places their vaccination and case rates are better than the U.S., and other parts of the world are not subject to the stiff entry requirements. German Chancellor Angela Merkel pressed Biden on the matter Thursday during their Oval Office meeting.

WASHINGTON — The director of the Centers for Disease Control and Prevention says the COVID-19 outbreak in the U.S. is becoming “a pandemic of the unvaccinated.”

He says the Biden administration expects cases to increase in the weeks ahead because of spread in communities with low vaccination rates. Four states accounted for 40% of new cases last week, with one in five coming from Florida.

But Zients says there are signs that increased cases are driving more people in those communities to seek vaccination at rates faster than the national average.

TOKYO — Japan’s top medical adviser for Prime Minister Yoshihide Suga’s government urged authorities to step up virus measures ahead of the Olympics and asked the people to avoid trips.

Tokyo registered 1,271 new cases Friday, the day after recording a six-month high of 1,308.

Dr. Shigeru Omi, who heads a government COVID-19 taskforce, says the next two months will be the “most crucial stage” in Japan’s fight against the pandemic. He urged people to watch the Olympics on TV at home with family members or close friends in small groups.

Omi says the ongoing upsurge in the Tokyo region is likely to accelerate, with the summer vacation, the Olympics and the Buddhist holiday week in August when people are likely to travel.

PARIS — The Eiffel Tower is reopening for the first time in nine months even though France is under new rules aimed at taming the delta variant.

This week, President Emmanuel Macron announced COVID-19 passes would be required to enter restaurants and venues such as the Eiffel Tower. Starting Wednesday, all visitors over 18 will need to show a pass proving they’ve been fully vaccinated, had a negative virus test or recently recovered from COVID-19.

The “Iron Lady” of Paris was ordered shut in October as France contended with its second virus surge of the pandemic. The tower stayed shut for renovations after most of the major tourist draws reopened last month.

MOSCOW — Daily coronavirus deaths in Russia have hit another record, with the authorities reporting 799 deaths. It’s the fourth straight day of record number of deaths.

On Friday, officials reported 25,704 new coronavirus cases. Daily new infections in Russia have soared from around 9,000 in early June to more than 25,000 last week.

Officials blamed the surge on the spread of the delta variant and a sluggish vaccine uptake that has remained lower than in many Western countries. As of Tuesday, 28.6 million Russians — or just 19.5% of the 146 million population — have received at least one shot of a vaccine.

LONDON — The British government’s top medical adviser has warned that number of people in hospital with the coronavirus could reach “quite scary” levels within weeks as cases soar from the delta variant and the lifting of lockdown restrictions.

Professor Chris Whitty spoke on a webinar hosted by London’s Science Museum, saying the U.K. is “not out of the woods yet.” His comments came in the wake of government figures showing that coronavirus infections have struck another six-month high and the number of people in hospital with COVID-19 and subsequently dying are at their highest level since March.

There were 3,786 people in hospital with COVID-19 and another 63 virus-related deaths reported Thursday. Another 48,553 confirmed lab cases were reported Thursday, the biggest daily figure since Jan. 15. The government has stated that daily infections could hit 100,000 this summer.

At the height of the second wave earlier this year, some 40,000 people were in hospital with COVID-19 and deaths reached 1,500 people a day.

Asad Umar also urged people to get vaccinated for their own safety and avoid becoming a source of the spread. He says the people who avoided the COVID-19 vaccine for any reason were risking their life apart from becoming a danger to their loved ones.

He says unvaccinated people won’t be allowed to visit tourist sites before and after Eid al-Adha or feast of sacrifice, which begins in Pakistan next week. Umar made these comments at a news conference amid a surge in COVID-19 cases and deaths.

MOSCOW — Authorities in the Russian capital have walked back on their order for restaurants to only admit customers who have been vaccinated against the coronavirus or could produce a negative test.

The decision announced Friday by Moscow Mayor Sergei Sobyanin becomes effective Monday. It retracts the measure that has been in place since late June, obliging restaurants and cafes to check. Sobyanin argued that the city officials were able to revise the decision because the pace of contagion has slowed down.

The third shot will be made available to all people regardless of age, health or which vaccine they received initially, Orban said in an interview with public radio. The government recommends, but does not require, the third dose to be administered at least four months following the second, and doctors may choose whether to provide patients with a different vaccine than previously received.

“There is no reason to fear a third vaccine dose. If people don’t have to fear it and their sense of security is increased if they receive it, then why would we keep them from this option?” Orban said.

Hungary is the latest country to offer booster shots amid concerns that some jabs do not provide full protection from COVID-19 to all recipients. In May, the United Arab Emirates and Bahrain announced they would offer third shots to some people who received China’s Sinopharm following concerns over insufficient development of antibodies, which protect against the virus.

In Hungary, which also uses the Sinopharm vaccine, some have also expressed worry that they are not fully protected from COVID-19, and have demanded third doses.

COLOMBO, Sri Lanka — Sri Lanka has received 1.5 million doses of the Moderna vaccine from the U.S. through the U.N.-backed COVAX facility.

It was the second shipment to Sri Lanka from the global COVAX effort after an AstraZeneca delivery in March.

Sri Lanka has given 36% of its population their first vaccine dose while 13% have received both doses.

Its vaccination campaign was set back by halted shipments of AstraZeneca from the Indian producer. It then turned to Sinopharm, Sputnik V and Pfizer to get its population inoculated.

TORONTO — Prime Minister Justin Trudeau said on Thursday Canada could start allowing fully vaccinated Americans into Canada as of mid-August for non-essential travel and should be in a position to welcome fully vaccinated travelers from all countries by early September.

Trudeau spoke with leaders of Canada’s provinces and his office released a readout of the call. He noted that if Canada’s current positive path of vaccination rate and public health conditions continue the border can open.

“Canada would be in a position to welcome fully vaccinated travelers from all countries by early September,” the readout said. “He noted the ongoing discussions with the United States on reopening plans, and indicated that we could expect to start allowing fully vaccinated U.S. citizens and permanent residents into Canada as of mid-August for non-essential travel.”

SEOUL, South Korea – South Korean officials are pushing for tightened pandemic restrictions beyond the hard-hit capital area as they wrestle with a record-breaking surge in coronavirus cases.

Prime Minister Kim Boo-kyum during a virus meeting Friday called for all local governments outside the greater Seoul area to simultaneously enforce four-person limits on gatherings after 6 p.m. to slow the viral spread.

Permitted social bubbles are even smaller in Seoul and nearby Gyeonggi province and Incheon, where officials are enforcing the strongest “Level 4” restrictions that prohibit gatherings of three or more people after 6 p.m., ban visitors at hospitals and nursing homes, and shut down nightclubs and churches.

The Korea Disease Control and Prevention Agency reported another new 1,536 coronavirus cases, the 10th straight day of over 1,000. The country’s caseload is now at 175,046, including 2,051 deaths. 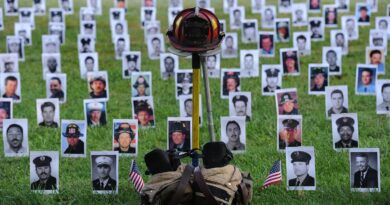