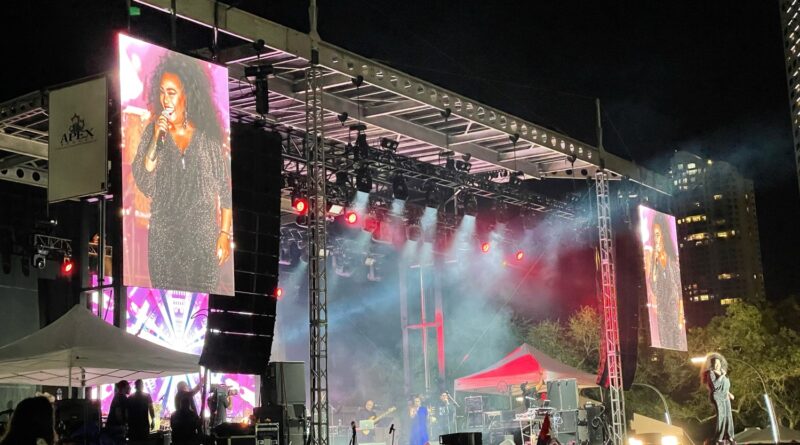 MIAMI (CBSMiami) – South Florida celebrations to ring in the new year went on despite the recent surge in Omicron cases throughout the region.

And while the rise of the neon Big Orange on side of the Intercontinental Hotel in Miami this year was canceled after the designer of the orange, Steve Carpenter, and his staff tested positive for COVID-19, other celebrations took place to ring in the new year.

In Miami, the big event was held at Bayfront Park, where Willy Chirino, Gente De Zona, Nacho, Yotuel, Chacal, and Jacob Forever took to the stage to the delight of hundreds of revelers.

A big fireworks show was scheduled for midnight.

The party could be seen on the city of Miami’s YouTube channel.

City of Miami Commissioner Joe Corrollo assured the public that the event would be safe.

“You’re going to find all the sanitation stations that we have and we’re going to be giving away masks until we run out,” said Carollo.

“Everyone is encouraged to wear masks if they choose it’s not mandated here in the city or state but that’s up to every individual,” says Tony Albelo, event producer.

In November, nine people were trampled to death at Astroworld in Houston, Texas.

At Bayfront Park Friday, police were out in full force and have a safety plan.

“We do have certain different levels and the crowd begins to push up it doesn’t become an issue and more importantly we can turn the volume on and off to give the crowd directions,” said Interim Chief Manny Morales, City of Miami Police.

“If you don’t feel well, don’t go out and put other people in jeopardy if you don’t feel like you’re safe don’t come out and if you do and want to take a precaution wear a mask and i think its everyone’s responsibility to be responsible,” said Tony Albelo, event producer.

Revelers in Miami had this to say:

“This is actually our first, usually we do something big for new year’s, this is like our first new year’s out, trying to enjoy the last of 2021, make it special and hopefully bring in some good vibes for 2022,” said Celeste Dewberry, visiting from Ohio.

“I want to travel again, I want to go out, I want don’t want any more booster shots you know some type of normal life you know what I mean, just good times, you know just normal again,” said Bethany Adkins, from West Palm Beach, who was at the Miami event.

“Actually you know what? It wasn’t actually that bad, it was tough at times, we’re seeing the back of it, we’re looking forward to 2022,” said Carolyn Cotter, visiting from Ireland.

“I wanna go bigger like everybody is doing,” said Eduardo Herrera, visiting from Colorado.

A lot of folks, many of them visitors, were trying to make the best of it and are optimistic for 2022.

In Fort Lauderdale, the big celebration took place at SW 2nd Street and SW 5th Avenue across from the Museum of Discovery and Science.

Hundreds came out to ring in the new year.

It was an entire evening of free entertainment leading to an illuminated Anchor Drop at midnight.

Mayor Dean Trantalis said earlier in the day, “People are going to celebrate tonight one way or the other so why not do it in the open air as opposed to being in a bar or a restaurant or in their own homes.”

This is the tenth year for the Fort Lauderdale New Year’s Anchor Drop Celebration, it was canceled last year because of COVID.

On Las Olas Oceanside Park there was a family-friendly concert, a pre-countdown party with DJ Spin Hype, and a laser light show and ball drop on a jumbo screen at midnight.

In Key West, the well-known drag performer known as Sushi was due to drop from above a Duval Street bar in a giant maroon, high-heeled shoe, continuing a two-decade tradition in the continental United States’ southernmost town.

“We hope people stay outside, stay in groups of people they know are vaccinated and stay away from people who are unvaccinated,” said Key West Mayor Teri Johnston.

1,000-game winner Magee not finished in Philly at 80 – Miami Herald