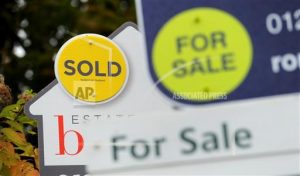 The Federal Reserve signaled that it may act sooner than previously planned to start dialing back the low-interest-rate policies that have helped fuel a swift rebound from the pandemic recession but have also coincided with rising inflation. The policymakers forecast that they would raise their benchmark short-term rate — which affects many consumer and business rates, from mortgages to auto loans — twice by late 2023.

Home sales in Grand Forks/East Grand Forks in May exceeded the year ago mark. A total of 95 properties exchanged hands last month compared to 74 a year ago. The average sales price was just under $239,000. The numbers from the Grand Forks Board of Realtors do not include privately sold homes…townhomes…and condos.

The number of Americans applying for unemployment benefits rose last week for the first time since April despite widespread evidence that the economy and the job market are rebounding steadily from the pandemic recession. Jobless claims rose 37,000 from the week before. As the job market has strengthened, the number of weekly applications for unemployment aid has fallen for most of the year.

Minnesota’s seasonally adjusted unemployment rate ticked down to 4.0% in May, from 4.1% in April, according to numbers released today by the Minnesota Department of Employment and Economic Development (DEED). The unemployment rate decline was due to people moving from unemployment to employment. For the fifth straight month, Minnesota gained jobs. Minnesota added 12,300 jobs in May.

A new monthly survey of bankers suggests strong growth continues across rural parts of 10 Plains and Western states. The overall Rural Mainstreet economic index slipped in to 70 June from May’s record high of 78.8, but it remained in positive territory above 50. Bankers from North Dakota…South Dakota…and Minnesota were surveyed.

Demand for air travel has been increasing across North Dakota. The state’s eight commercial airports posted a total of 69,285 airline passenger boardings in May. That’s still about 30% below pre-pandemic numbers. The GFK had 5,389 passengers pass through the gates. That compares to 334 one year ago and 8,743 in 2019.

Customers and employees of several Carnival Corp. cruise lines might have had personal information stolen. The Miami-based company says a data breach in March might have exposed things like Social Security numbers and dates of birth for some customers, employees and ship crew members on Carnival Cruise Line, Holland America Line and Princess Cruises. The company declined to say how many people’s information was exposed.

The Board of Trustees of the Minnesota State Colleges and Universities has reelected Jay Cowles to the role of chair, and elected Rudy Rodriguez to the role of vice chair. Both appointments become effective July 1, 2021 and have a term of one year. Members also named Andriel Dees to serve as the vice chancellor for equity and inclusion. The appointment becomes effective immediately.

The University of North Dakota’s Center for Innovation and the Grand Forks Region Economic Development Corporation opened applications for second cycle of the fourth year of InternGF. The program is designed to increase the number of local internship offerings, aiding employers’ workforce recruitment and retention efforts by introducing UND students to career and entrepreneurial opportunities. InternGF offers up to $3,500 to offset an intern’s salary.

A string of notable American women will appear on the U.S. quarter under a four-year program that begins in 2022. The U.S. Mint says its American Women Quarters Program will celebrate women’s accomplishments and contributions to U.S. history.

Report: Boston’s hotel market is among the nation’s most depressed – MetroWest Daily News