Portland Trail Blazers star Damian Lillard denies that he’s requested a trade from the fledgling organization after a report surfaced that he wants out.

In no way does this mean Dame won’t request a trade after Portland exited in the first round of the NBA Playoffs for the fourth time in five years.

Among those who Lillard is said to be targeting, the Miami Heat don’t really have a ton of assets. Realistically, they can’t compete with teams like the Golden State Warriors and New York Knicks in terms of trade packages for Lillard.

Even then, front office head Pat Riley has been able to pull off the unthinkable in the past. Below, we look at three ideal Damian Lillard trade scenarios to the Miami Heat

This potential deal gets a bit complicated due to the fact that Miami has team options on Iguodala and Dragic. The only way these Heat pick up said options is if they have a deal worked out to ship the two veterans off for another star player to team up with Jimmy Butler and Bam Adebayo.

In this scenario, Portland acquires three first-round picks (2024, 2026, 2028) as the centerpieces (all unprotected). It also reserves the right to swap first-round picks in 2023 and 2025. In terms of the youngsters coming in, Nunn would be part of a sign-and-trade and Achiuwa could act as a solid building block after a good rookie season from the forward.

Depending on the number of teams that would legitimately be in on a Damian Lillard trade, the Heat might have to offer more than one first-round pick in this hypothetical deal. Even then, Bam as the centerpiece heading to Portland could make sense for the Blazers. He’s among the top young big men in the game. At 24 years old, Adebayo averaged 18.7 points, 9.0 rebounds and 5.4 assists a season ago.

As for Miami, it swaps out Iguodala and Dragic for two more suitable veteran options. Nurkic, 26, was solid in a return from injury last season — averaging 11.5 points and 9.0 rebounds. Covington would provide the ability to play all three positions in the frontcourt.

Get all of that? While complicated on the surface, this actually makes a ton of sense for all three teams involved. First off, Dallas is going to look to move off the bloated contract of Kristaps Porzingis after reports suggested he’s unhappy in Big D. In order to do so, Mark Cuban and Co. must somehow find a way to get Luka Doncic some help. This scenario includes them adding three capable veterans — all of whom would be on expiring contracts. That’s huge due to the fact that the 2022 NBA free agent class is going to be stacked. 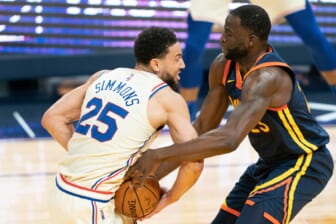 From Portland’s perspective, it takes a chance on the 25-year-old Porzingis with the hope that he can turn things around. If not, the likes of Herro, Green and four first-round picks (from from Dallas, three from Miami) is a darn good package for Lillard.

Obviously, Miami would be the biggest winner here. It would be able to team Lillard up with Jimmy Butler and Bam to form one of the best trios in the entire Association and return to championship contention after a year hiatus.